[POLL] BRITNEY VS. CHRISTINA: WHO'S THE GREATER TURN-OF-THE-MILLENNIUM POP DIVA? 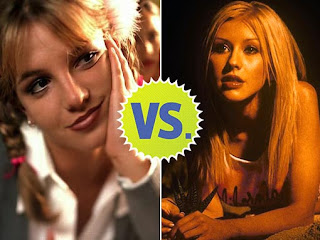 (This is part of an ongoing series of posts in which EW writers debate the most defining pop culture rivalries. Past subjects have included the Schwarzenegger/Stallone, Godfather/Goodfellas, and the neverending boy-band battle between ‘N Sync and the Backstreet Boys. Come back here on Thursday for a duel over the relative greatness of Movies and Videogames, and then spin back here in one week for a cage match between The Simpsons and South Park to decide the great American animated comedy.)

Melissa Maerz (Team Christina): You know that old debate about how a woman is either a Marilyn or a Jackie? Well, Britney’s a Marilyn: sure, she’s sexy, but she’s totally blank, and she sings like she’s trying to fog up a mirror, one tiny breath at a time. Christina’s a total Jackie. And, yes, I know it’s weird to say that about someone who’s worn ass-less chaps, but hear me out. She’s a super ambitious lady knows what she wants and how to get it—even if what she wants is to foxy-box her brains out. Britney always looks like someone else is pressing the “desire” button on her Britbot controls.

Leah Greenblatt (Team Britney): It’s interesting that you call Britney a Marilyn, because I think Brit actually has a lot more in common with her than just a breathy giggle and a box of Clairol. Pop culture has always had sexpots to spare, but the thing that I think made Marilyn outlast so many of them was her vulnerability. Britney has that same indefinable quality—and I admit she basically sounds like a baby with a head cold when she sings—that Marilyn had; there’s a kitteny sweetness to her sexiness that Christina just doesn’t project. If anything, Christina to me is a Joan Crawford—the kind of lady you admire and know is incredibly talented but are also kind of terrified of, because she projects this hardness that pushes people away; something about her attitude seems to say “I don’t need you to like me. In fact, you not liking me only makes me stronger.” (Oh look! She actually made a song about that.) Also like Joan, she has crazy eyebrows.

Melissa Maerz: Christina would give you the hanger for saying that! I agree that Britney’s more likeable, but only in the vague, dispassionate way that, say, Cheerios are likeable. When it comes to actually loving someone, she’s got nothing on Christina, who adores the people close to her with equal hold-my-earrings ferociousness: men (and not necessarily attractive men, which makes me like her more), her son Max (who inspired an album about how baby-love can transform a woman into a mighty cyborg), and yeah, probably herself. But when Britney’s just singing down a list of menu options for dudes (Threeway? Slave 4 U? Lace and leather?), maybe we could use more songs like “Beautiful.”

Leah Greenblatt: I will give you that Britney is not a balladress (even though I still hold a spot for her tinkly little music box sadz “Everytime” and that topless-Stephen-Dorff video. Go towards the light, Britney!) In fact, I think Christina’s “You Lost Me” and “I Am,” from the much-maligned Bionic, are two of the most gorgeous things she’s ever done; they actually have that vulnerability I’ve been looking for in her. But it’s hard to find as many pop-song highs in her catalogue; I like “Genie in a Bottle” and “Candyman” a lot, but not the way that I love “…Baby One More Time,” “Toxic,” and “Circus.”
I should say as an aside that there’s absolutely room for both of these women; it’s ridiculous to say we can only have one. To me though, Christina’s vocal superiority has always been a little schoolyard show-offy; why deliver a vowel in one note when you can do it in 47? Well, because that’s 43 more than we asked for. (See: this year’s Aretha Grammys tribute.)

Melissa Maerz: I’m a big lover of “Toxic,” though I’d put “Ain’t No Other Man” against it any day. I think that’s one of the most romantic marriage anthems ever, and it’s the perfect style guide to what makes a great man (soul, class, general bad-assery). You’re totally right that Christina’s kind of an exhibitionist, in terms of her singing, and, uh, otherwise. But you’ve got to admire the sheer force of that powerhouse voice, erupting as it does from this tiny body that probably spends 90% of its energy trying not to topple over on those stripper heels. When I watched her on The Voice, I loved that she could walk in there looking like a little blonde Snooki who’d just rolled out of bed, lazily mumble, “Just do it like this,” and then open that mouth and unleash an emotional intensity that could strip the hair gel off Adam Levine’s head. She’s not even trying! Though of course, maybe that’s a reason to root for Britney. You can tell she’s worked so incredibly hard for this, she’s almost exhausted. That’s why I’m partial to the punk-rock, shaved-head-era Britney who sang “Piece of Me,” her most spirited defense against her detractors. It’s like, “I’ve been doing this since I was 17! Stop talking about me, bitch!” Some songwriter might’ve jotted those thoughts down on her hand for her as a cheat sheet, but she really owns them.

Leah Greenblatt: Girl, these two had already earned their ten-years-of-showbiz-service gold wristwatches by the time they were 17—don’t forget the Disney days! I won’t lie and say that Britney’s at the peak of her powers now; she’s clearly lost a lot of the fire she had in her bodysuit-sparkle, dance-not-shuffle days, and I really do miss that look in her eyes that said she was loving the power she had onstage. To me, though, it takes more than a voice like Christina has; I think that can actually be a crutch sometimes, leaving us with more ululating than actual entertaining. It’s a fantastic party trick, but it’s not a substitute for great material, and Britney still gets the best in the business to work with her. Even if it takes a village to build a pop song like “I Wanna Go,” it beats Christina panting about her X-rated brunch menu—hold the (fertilized) eggs, please!—or her woohoo.

Bottom line, I think they’ve both given us a pretty fantastic decade-plus of pop ridiculosity, and some truly great songs; I can’t take either of that away from them. But even though my head tells me Christina is the technically superior artist, my heart belongs to Britney.

Melissa Maerz: Hey, Christina’s a 30-year-old divorcee and single mom. If she can still brag about getting “strawberries and cream” in bed, more power to her. And while we’re at it, Britney deserves to have some handsome young thing serve her Breakfast Cheetos to her on a silver platter, too. Suddenly, I’m ashamed of pitting these two against each other in some kind of diva-off. Why should there only be room for one of them when there’s still space for way too many boring rock dudes in this world?

Leah Greenblatt: Exactly. So, we agree! I have a feeling EW readers might want to say a little something though…