[PHOTOS] CHRISTINA AGUILERA JETS OUT OF LA WITH MAX & MATT 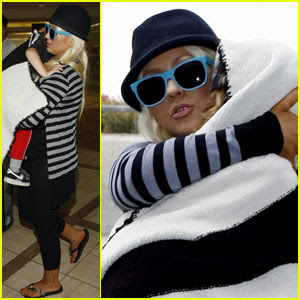 The 30-year-old The Voice coach and boyfriend Matthew Rutler caught a flight out of town just a few days after flying into L.A.

Max had what looked like a bruise under his right eye. Hope he’s okay!

Though Christina is set to perform at a tribute concert for Michael Jackson, some fans of the King of Pop are reportedly lobbying for its cancellation.

The group “criticized the timing of the show, which coincides with the trial of Dr. Conrad Murray for involuntary manslaughter in the death of Jackson, and expressed confusion over the event’s charitable donations and high ticket prices,” Rolling Stone reports.

10+ pictures inside of Christina Aguilera, son Max, and her boyfriend Matt Rutler at LAX…

Posted by AGUILERA ONLINE™ at 8:01 PM