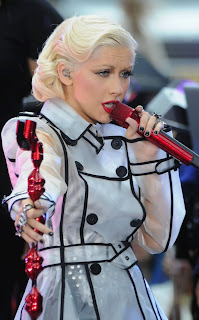 Your Chicago Pop Music Examiner recently attended a secret meeting at the Hilton in Downtown Chicago. I wasn't told what it was about (I assumed a bunch of Lady Gaga fans gathered there to kill me), but had to go due to curiosity.

There were seven people at this meeting and I was basically strip searched so I couldn't record any information. An audio recording, which took place on April 2, 2010, was played and featured a bunch of people in a room talking about ways to destroy Christina Aguilera's upcoming "atomic disaster" Bionic.

"I have already emailed Perez Hilton ," a man with a thick Middle Eastern accent said. Another suggested that they "work the phones," which sounded like he meant to have people call radio stations and tell them to not play the the album's first single "Not Myself Tonight."

"Nobody cares about the phones; it's all about the blogs!" a frog-like voice that belonged to a guy named Roger revealed. The next part of the tape featured the group playing "Not Myself Tonight" and laughing over it. After the record stopped, insults were made about Christina Aguilera that are too offensive to talk about here.

The guy who led the present meeting at the Hilton was a former record executive who now teaches at Columbia University. He believes the April 2, 2010 meeting was held by Interscope executives. However, the name Lady Gaga wasn't mentioned once in the recording.

Peter Buchanan Examiner · 46 years old
I wish I could post the recording I heard, but can't (yet). However, all my posts are true and this will be proven so soon enough. Notice, I didn't say that this was the work of Interscope. However, it is suggested by a lot of people that it is.