[NEWS] 'ONLY CHRISTINA AGUILERA HAS UNDERSTOOD WHAT MADONNA'S GAME IS ABOUT...' 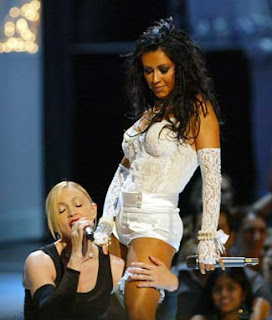 Through music history we have seen, fortunately, all kind of artists and singers doing their thing. Female singers have paid the price of gender inequality. Still, it never mattered at all for people like Tracy Chapman, Sinéad O'Connor or Tori Amos: all of them are brave, valuable, talented women never afraid to speak their minds.

But when it comes to sex, people have the weirdest reactions, thoughts and feelings. If you put together sex and music the thing gets hotter. Well, "hotter" if you are a man. For women it just gets harder and harder, no pun intended.

Just ask Madonna: she has taken all kind of insults, derogatory terms and even death threats only for being sexual and herself at the same time. She did use sex a lot as a form of marketing. But according to all her detractors who claimed she just "sells sex" and nothing else, her career would have ended as soon as 1994 arrived. Right?

But Ciccone evolved from being the 'sexiest' pop star to the most influential and successful woman in show biz history. Too much to say. But albums like "Ray of Light", "Like a Prayer", "True Blue", "Music" or "Confessions on a Dance Floor" speak volumes about her artistry and points of view as a woman. Nevertheless, controversy has never been away from her. Do you remember The Confessions Tour's Live To Tell on-stage performance?

There's something "bad" about queen of pop's legacy though not entirely her fault: She made believe to a whole new generation of pop stars that, by taking your clothes off and acting sexy all around you can be the greatest music star. It has worked for many: just take a look at Britney Spears, Rihanna, Lady Gaga, Christina Aguilera and even the talentless I-can't-sing-a-single-note Katy Perry.

But just a few of all these women, let's say only Christina, have understood what Madonna's game was about: it's a lot easier to show off your naked body on a video or onstage than producing an album like Ray of Light. In other words, sex was only a part of Madonna's media attack.

Samantha Fox was very sexy too, so was Sabrina Salerno or Apollonia Kotero. They showed some skin too. But none of them were able to get people questioning about themselves, life and art like Madge has. Many of her detractors have not listened to masterpieces like "Promise To Try", "Live To Tell", "X-Static Process" or "Nothing Fails". But again, does it really matter what they think?

Only time will tell who of all these new young stars stays and who disappears. And in the middle of this media fever of sexy starlets, Madonna can only smile and think... "I'm pretty much up there with Aretha, Tina, Barbra and Janis... now dare to dream!"

Source: Impre
Posted by AGUILERA ONLINE™ at 12:37 AM