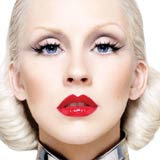 Christina Aguilera was excited to meet Adele at her Los Angeles concert last night.
The American songstress attended the British singer's Adele Live concert tour ' the second set of performances by the artist that supports her second studio album 21.

Christina was thrilled to meet the British sensation backstage after the show at the Greek Theater in Los Angeles.

'Another with Adele after LA show. Love her!...(sic)' she wrote on her personal Twitter page, accompanied by a photo of the pair together.

Christina, who is famed for her powerful vocals, was astounded at Adele's ability to work the crowds at the sell-out show. The 30-year-old star gushed about how much she respects the songstress, and revealed her favourite track.

'Me & Adele. 'Someone Like You' is my favorite! Beautiful to see all her fans sing it tonight! ;) love u Adele (sic),' she wrote.

Christina wasn't the only fellow celebrity in attendance at the Los Angeles venue. Jessica Simpson and her fiancé Eric Johnson, Robert Pattinson, and the cast of Glee also turned up to support the singer.

Adele has been enjoying a massive amount of career success lately, thanks to the release of her second album 21. It's been a hit across Europe as well as in America.

Posted by AGUILERA ONLINE™ at 6:07 AM