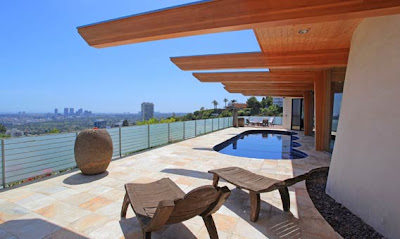 Christina Aguilera has sold her Sunset Strip-area house for $4,653,815.

The Midcentury Modern, built in 1960, is in the celebrity-populated Bird Streets. The 6,500-square-foot post-and-beam house has a recording studio, screening room and walls of glass opening to a pool, a 12-person spa and a fireplace. There are four bedrooms and seven bathrooms.

Aguilera, 30, is among the world's bestselling recording artists with sales of more than 50 million records. The Grammy-winning soprano's hits include "Ain't No Other Man" and "Beautiful." She is a coach on "The Voice" (2011).

Public records show she bought the property in 2003 for $5 million.

Posted by AGUILERA ONLINE™ at 3:37 PM