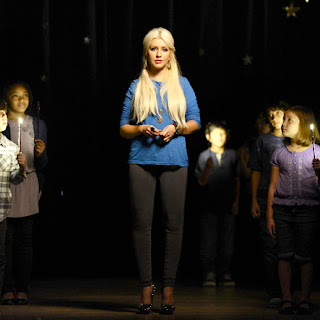 It will show her singing a lullaby to a group of children with lyrics that stress the need to care about people who don’t have enough to eat.

The video stems from Aguilera’s work as a global spokeswoman for YUM! Brands Inc., which owns thousands of KFC, Taco Bell and Pizza Hut restaurants worldwide. The company set up the public-service video, scheduled to air on U.S. television beginning in September, as part of its 4-year-old campaign against world hunger.

“After I had my son, Max, I knew I wanted to get involved in causes that help children,” said Aguilera by e-mail about her 3-year-old son. “When I learned how millions of children go to bed hungry, my only response was, ‘What can I do to help?’”

Aguilera, a spokeswoman for YUM Brands’ World Hunger Relief program since 2009, said, “We tried to incorporate a classic lullaby but give it a new twist.” The company declined to provide a title or lyrics for the song.

Aguilera has sold about 50 million albums worldwide and has served as a co-star and coach on NBC’s “The Voice.” Since joining Yum Brands’ efforts, the 30-year-old Staten Island, New York, native has helped the company raise about $50 million. Proceeds go to the United Nations World Food Programme.

FAST-FOOD EMPIRE
The company is one of the world’s largest restaurant operators, with 38,000 outlets in 110 countries. Its Harvest program has donated more than $500 million of food to the hungry in the U.S.

Since launching its World Hunger Relief initiative in 2007, it has raised about $85 million for the World Food Programme and other relief organizations, Blum said. As part of her ambassadorial work, Aguilera traveled to Haiti last year after the January earthquake to observe hunger- relief efforts firsthand, Blum said.

“In order to effect great change, we need to look at how we can help those in our own communities as well as globally,” Aguilera said. “We take food for granted, but it isn’t a luxury for many people.”