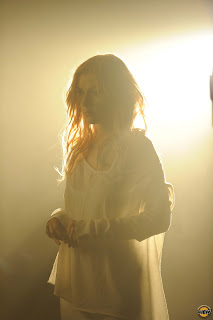 There are nearly 1 billion hungry people around the world today. Hunger and malnutrition are the number one risk to health worldwide – greater than AIDS, malaria and tuberculosis combined. Among the key causes of hunger are natural disasters, conflict, poverty, poor agricultural infrastructure and over–exploitation of the environment. Despite significant economic progress in the past decade, India is home to about 25 percent of the world's hungry poor.

“As a mother, the idea that even one child could go to bed hungry is unacceptable and that's why I'm so passionate about fighting global hunger. I'm excited about my new PSA for World Hunger Relief and hope it will raise more awareness about the issue and move millions of people from hunger to hope." said Christina Aguilera, the global ambassador for “Yum! Brands World Hunger Relief effort.

Christina has served as global spokesperson for Yum! Brands’ World Hunger Relief effort since 2009 where her participation has helped raise nearly $50 million for WFP and other hunger relief agencies. She also serves as an “Ambassador Against Hunger” for WFP where she has traveled on relief trips with the organization.

“The fact that India alone is the home to a quarter of the world’s undernourished population is disheartening. Every year through various awareness and fund raising initiatives across the country, we address this grave issue. In 2010 we raised Rs 1 crore through our brands Pizza Hut, PHD, KFC and Taco Bell and every rupee raised was directed towards United Nations Food Program’s operations for fighting hunger in India. This year we aim to make the initiative bigger through on-ground events and even the digital media.” said Niren Chaudhary, Managing Director - India at Yum! Brands.

In an attempt to make this initiative bigger and stronger, the Yum! family in India will once again come together this September to spread the awareness and generate funds to help more families across the country to lead a more healthy life.

Since World Hunger Relief launched in 2007, Yum! has collected nearly $85 million, more than one million of the Company’s employees, franchisees and their families have volunteered more than 21 million hours to aid hunger relief efforts in communities worldwide. The effort has helped WFP and other hunger relief organizations to provide over 350 million meals and save the lives of millions of people in remote corners of the world.

WFP is the largest humanitarian agency fighting hunger worldwide. Each year, on average, WFP feeds more than 90 million people in more than 70 countries.