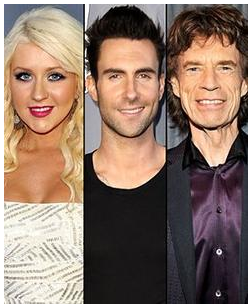 Except, of course, Mick Jagger. Adam Levine's hit song "Moves Like Jagger" features fellow Voice coach Christina Aguilera, but a source tells Us Weekly the man who provided the inspiration for the song will also appear in its music video.

"Making a video for 'Moves Like Jagger' with Christina Aguilera tomorrow!" Levine, 32, tweeted Thursday. The Maroon 5 frontman and Aguilera, 30, first performed the homage to Jagger, 67, on The Voice in June; sources now tell Us that the legend himself will have a part in the hit song's video.

Us first reported the news last month that all four coaches of The Voice -- including Cee-Lo Green and Blake Shelton -- would be returning for the show's second season.

Tell Us: Are you excited to see Mick in the video for "Moves Like Jagger?"