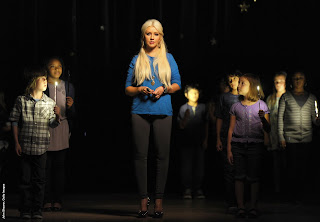 Aguilera will appear in the new PSA as well as advertising, online efforts and posters made possible by KFC, Pizza Hut and Taco Bell to be released this fall. She has served as global spokesperson for Yum! Brands’ World Hunger Relief effort since 2009 where her participation has helped raise nearly $50 million for WFP and other hunger relief agencies. She also serves as an “Ambassador Against Hunger” for WFP where she has traveled on relief trips with the organization to Haiti and Guatemala.

There are nearly 1 billion hungry people around the world today. Hunger and malnutrition are the number one risk to health worldwide – greater than AIDS, malaria and tuberculosis combined.

“As a mother, the idea that even one child could go to bed hungry is unacceptable and that’s why I’m so passionate about fighting global hunger,” said Aguilera. “I’m excited about my new PSA for World Hunger Relief this fall and hope it will raise more awareness about the issue and move millions of people from hunger to hope.”

Yum! Brands’ annual fall World Hunger Relief effort is the world’s largest private sector hunger relief initiative, spanning 110 countries, 38,000 KFC, Pizza Hut and Taco Bell restaurants and over one million employees, to raise awareness, volunteerism and funds for WFP and others. Consumers can visit www.FromHungertoHope.com or donate in the restaurants this fall. Every U.S. dollar raised will go directly towards WFP’s operations to fight hunger around the world.

“Christina is raising tremendous attention to the critical global hunger problem and inspiring others to become part of the solution,” said David Novak, Chairman and CEO, Yum! Brands, Inc. “We are extremely thankful for her continued partnership in the fight against hunger to save millions of lives.”

Since World Hunger Relief launched in 2007, more than one million of the Company’s employees, franchisees and their families have volunteered more than 21 million hours to aid hunger relief efforts in communities worldwide. The effort has raised nearly $85 million for WFP and other hunger relief organizations and is helping to provide over 350 million meals and save the lives of millions of people in remote corners of the world.

Yum! is also addressing hunger across the U.S. through its Harvest program. Since its launch over a decade ago, Harvest has become the largest prepared-food donation program in the world. Through Harvest, Yum! has donated over 125 million pounds of food, with a value of over $500 million, to those at risk of hunger in the U.S. The Company also has been the primary sponsor of the Dare to Care Food Bank in Louisville for nine years, and has donated nearly $8 million to this local agency.

Yum! Brands, Inc., based in Louisville, Ky., is the world’s largest restaurant company in terms of system restaurants with approximately 38,000 restaurants in more than 110 countries and territories. The company is ranked #214 on the Fortune 500 List, with revenues of more than $11 billion in 2010. Four of the company’s restaurant brands – KFC, Pizza Hut, Long John Silver’s and Taco Bell – are the global leaders of the chicken, quick–service seafood, pizza and Mexican–style food categories. A&W Restaurants is the longest running quick–service franchise chain in America. Outside the United States, the Yum! Brands system opened approximately four new restaurants each day of the year, making it a leader in international retail development. The Company has consistently been recognized for its reward and recognition culture, diversity leadership, community giving, and consistent shareholder returns.

Source: PitchEngine
Posted by AGUILERA ONLINE™ at 11:01 AM