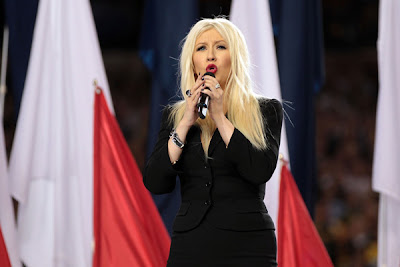 CNN: Christina Aguilera does know the words to the national anthem

Okay, so Christina Aguilera did a lyrical switch-up while performing the national anthem at the Super Bowl on Sunday.

But let’s think back to happier times, when she belted out “The Star-Spangled Banner” at both Game 6 and Game 7 of the NBA finals last summer.

See? She DOES know the words!

As she said in a statement, last night was just a fluke.

“I got so lost in the moment of the song that I lost my place,” the 30-year-old singer told CNN. “I can only hope that everyone could feel my love for this country and that the true spirit of it's anthem still came through.”
Source: CNN
Posted by AGUILERA ONLINE™ at 11:39 AM