CHRISTINA TO BE FEATURED AT THE ROCK AND ROLL HALL OF FAME AGAIN! 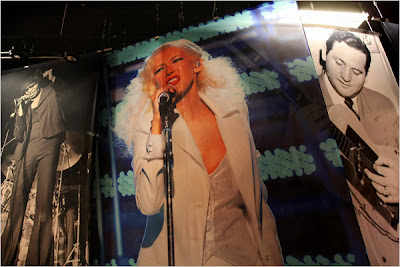 The Rock and Roll Hall of Fame and Museum will open a groundbreaking and provocative new exhibit that will illustrate the important roles women have played in rock and roll, from its inception through today. Women Who Rock: Vision, Passion, Power will highlight the flashpoints, the firsts, the best, the celebrated -- and sometimes lesser-known women -- who moved rock and roll music and the American culture forward.

The interactive exhibition will spotlight more than 60 artists and fill two entire floors of the museum. The exhibit will feature artifacts, video and listening stations, as well as a recording booth where visitors can film a short story or moment of inspiration related to women in rock. The exhibit will move through the rock and roll eras, weaving a powerful and engaging narrative that demonstrates how women have been the engines of creation and change in popular music, from the early years of the 20th century to the present. Women Who Rock is sponsored by PNC and Time Warner Cable.

Causing a Commotion: Madonna and the Pop Explosion
Madonna unapologetically celebrated and monetized her sexuality and physicality, paving the way for female performers to explore previously taboo roles and take control of their image and career. Highlighted artists will include Madonna, Cyndi Lauper, Britney Spears, Christina Aguilera, Gwen Stefani and Janet Jackson.