Because the Super Bowl can’t possibly make do with just one diva, two powerhouse songbirds kicked off this year’s game: Lea Michele and Christina Aguilera. Michele went first to warble out a (rather muzak-ically arranged) rendition of “America the Beautiful.” Dressed in a demure white pea coat and beige trousers, Michele sounded fine to my ears and seemed perfectly poised, her voice betraying little evidence of any nerves she might have been feeling. But let’s face it: Girl was merely the warm-up act for the real diva on hand — even if the camera did cut to ex-prez W and the missus Laura in the stadium during her song. I suppose by Xtina standards, the “five-time Grammy winner” looked pretty modest as she took the stage to turn our national anthem into her usual melisma-palooza, but come on. Christina doesn’t get out of bed without the promise of at least a little razzle-dazzle. Hence, the bedazzled stilettos that offset her black power suit. To go with her power pipes! And mic stand? She don’t need no stinkin’ mic stand! That would get in the waaa-ahh-aaa-ahh-aaa-yyyyy of all her vocal runs! The lady’s a belter. And belt out the “Star-Spangled Banner” she did. But… oops! In all her wailing, Aguilera flubbed a line. About 50 seconds in, instead of “O’er the ramparts we watched, were so gallantly streaming,” she sang “What so proudly we watched, at the twilight’s last gleaming.” Yikes. Poor Francis Scott Key is turning in his grave. So Michele gets points for singing the lyrics correctly. But for pure star, wow-we’re-at-the-Superbowl-let’s-put-on-a-show! power, there’s no denying that Xtina lives for that. She entertained. And she made more football players cry. Also: She had the better shoes. What do you think? In the battle of the divas, who takes the glittery Superbowl Songbird Princess crown? [Entertainment Weekly]
Meanwhile, Christina Aguilera gave a stirring performance of the National Anthem -- easily the best one we have heard in quite some time for football's biggest game. [Examiner]

Christina Aguilera belts out the National Anthem at the Super Bowl held at Cowboys Stadium on Sunday (February 6) in Arlington, Texas. The game will be played against the Pittsburgh Steelers and the Green Bay Packers. The 30-year-old singer has a connection to the Steelers as she grew up in Pittsburgh and has been singing the National Anthem for the team since she was seven-years-old! Even though she mixed up the lyrics for a second, Christina continued on like a pro! Christina wore a Dolce & Gabbana skirt suit, Stephen Webster jewels, and Christian Louboutin shoes. [JustJared]

As football fans gathered on Sunday night (February 6) to watch the match-up between the Pittsburgh Steelers and Green Bay Packers at Super Bowl XLV, Christina Aguilera took to the stage to perform the national anthem. Moments earlier, "Glee" star Lea Michele performed "America the Beautiful" before kickoff in chilly Dallas. Wearing her hair down and donning a black suit, Aguilera belted out the song as both the Terrible Towels and Cheese Heads counted down the moments until kickoff began. The Grammy winner got the crowd hyped as she hit the crescendos of the song, while celebrities and players looked on, many of the players nervously looking to the sky or holding back tears as they prepared to take the field. Although her voice never wavered as she paid tribute to the country in song, Aguilera did briefly flub the lyrics, but she handled it like a pro, rendering the mistake barely noticeable. Aguilera grew up outside of Pittsburgh and is presumably a Steelers fan. "I have been performing the anthem since I was 7 years old and I must say the Super Bowl is a dream come true," Aguilera said recently. "I am really excited to be part of such an iconic event." [MTV]

Like Whitney Houston, Mariah Carey, and Beyoncé before her, Christina Aguilera was the latest diva to have the honor of performing “The Star-Spangled Banner” at the Super Bowl. The blonde superstar, demurely dressed in all black, put her powerful pipes on display at Cowboys Stadium in Dallas, Texas, before the Pittsburgh Steelers took on the Green Bay Packers on Sunday (Feb. 6). Xtina made a slight blunder with some of the lyrics, but that couldn’t stop even the toughest NFL players from shedding a tear. Watch her soaring rendition below and share your thoughts. [RapUp] 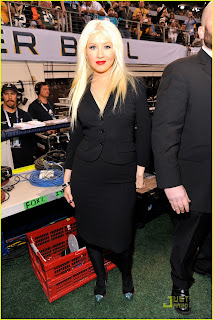 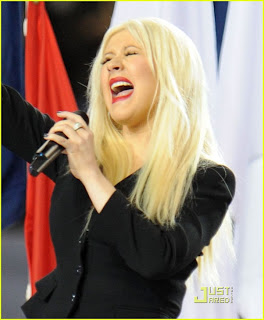 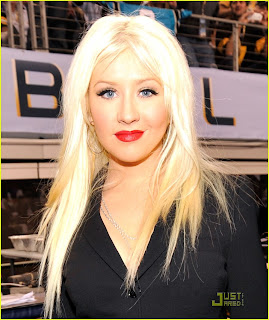 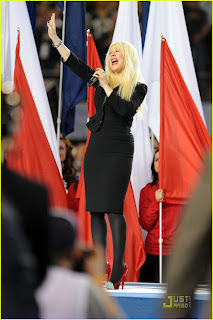 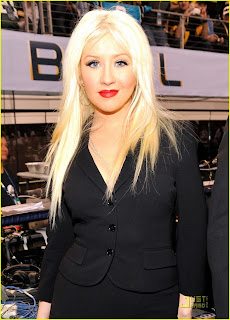 Posted by AGUILERA ONLINE™ at 3:41 PM