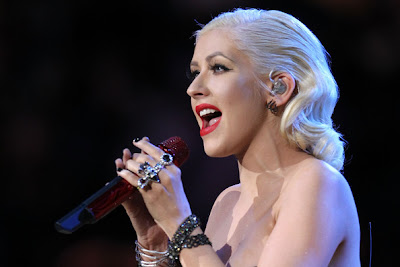 Five-time Grammy award winning singer-songwriter Christina Aguilera will sing the National Anthem as part of Super Bowl XLV pregame festivities at Cowboys Stadium in North Texas on Sunday, Feb. 6, the NFL and FOX announced Monday. The performance will be televised live on FOX prior to kickoff.
More than 153 million viewers in the U.S. watched last year’s Super Bowl, the most-watched television program in history. The pregame show and Super Bowl XLV will be broadcast worldwide.

“I have been performing the Anthem since I was seven years old and I must say the Super Bowl is a dream come true,” Aguilera said. “I am really excited to be part of such an iconic event.”

Aguilera returns to the Super Bowl, having performed during halftime of Super Bowl XXXIV in Atlanta. She is among many great performers who have been honored with singing the Super Bowl National Anthem, including: Billy Joel, Diana Ross, Neil Diamond, Whitney Houston, Harry Connick, Jr., Garth Brooks, Natalie Cole, Vanessa Williams, Luther Vandross, Jewel, Cher, Faith Hill, the Backstreet Boys, Mariah Carey, Dixie Chicks, Beyoncé Knowles and many more. (See below for a complete list of National Anthem performers from past Super Bowls.)
The NFL previously announced that The Black Eyed Peas will perform in the Bridgestone Super Bowl XLV Halftime Show.

The pregame and halftime shows are an NFL Network Production and will be executive produced by Ricky Kirshner.