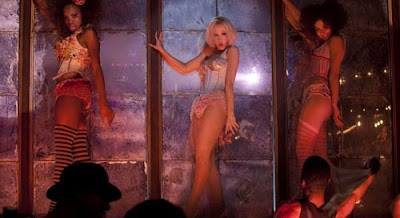 Christina Aguilera, Cher and Kristen Bell bringing Burlesque to Blu-ray
Sony Pictures Home Entertainment has announced that the musical BURLESQUE, starring Christina Aguilera, Cher, Kristen Bell, Stanley Tucci and Eric Dane, will be available on Blu-ray March 1st, 2011 in a Blu-ray/DVD combo pack. The film follows a small town girl (Aguilera) who moves to Los Angeles to become a star. When she stumbles into a burlesque bar and blows everyone away with her talent she discovers her true place. The film was nominated for three Golden Globes and won Best Original Song for “You Haven’t Seen the Last of Me.” The Blu-ray will also include all six songs and performances as a special feature.

Even though I originally touted this film as a SHOWGIRLS rip off, all the hype has gotten me excited. This will be one of those Blu-rays that I will buy on Tuesday and watch that same night-much to the dismay of my spouse. Special features for BURLESQUE include:
Source: Flix66
Posted by AGUILERA ONLINE™ at 12:16 PM