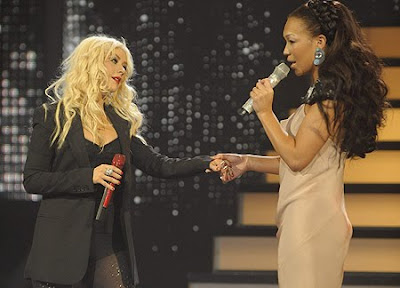 JUBILANT Rebecca Ferguson today told the ECHO her dreams of fame and fortune were far from over.

She took time out to rubbish rumours that Christina Aguilera had tried to upstage her and stole some of her lines during their duet.

And today Rebecca thanked her fans for their support but begged them not to feel sorry for her after she came second to Matt Cardle.

The mum-of-two revealed she was given a massive boost afterwards by her mentor Cheryl Cole.

She said: “Cheryl said I’m still going to have a career and I’m going to be fine, which was really lovely.

“It was a shock to be in the final two because One Direction were such lovely boys and had a lot of support.

“When I look back I wish I would have relaxed more. Every week I thought I was going and after all that stress I was in the final.”

The 24-year-old also defended Cheryl after some viewers claimed the X Factor judge had ignored Rebecca for weeks in favour of rivals Katie Waissel and Cher Lloyd.

“But Cheryl has been really supportive to me. Cher is a lot younger than me. I always felt I could go into Cheryl’s dressing room and have a good gab. She reminds me of a normal Liverpool girl. I like to think we’ll stay in touch.”

Cheryl’s Girls Aloud bandmates, Runcorn singer Nicole Roberts and Kimberley Walsh, who had been in the audience for Sunday's final, rushed backstage to console their pal as soon as it was announced painter-decorator Matt had won.

But Liverpool’s down-to-earth girl was busy getting masses of hugs from her children Lillie May, six, and Karl, four.

The former Gateacre Comprehensive pupil said: “I spent time with my babies and my mum and my family.

“It was an amazing night. I think we were all happy to be in the final. We all agreed we were winners and our lives have changed now.

“People were saying they were sorry I didn’t win. They were expecting me to be gutted, but I’m just so happy I made it this far.”

The Anfield singer, who auditioned for the X Factor for the third time in March, said her highlight was being paired with Christina Aguilera to sing Beautiful.

She said: “She’s an amazing artist. I was so starstruck. I still can’t believe I got to sing with her.

“We rehearsed it through and I was worried I would sing her lyrics so she said we would work it out on stage. She told me to keep eye contact with her.

“I thought she was really sweet. I liked her. Don’t get me wrong she was a professional but at the same time she didn’t have to record a good luck message for me.”

I hope none of you read that trash Perez publishes. 99% of the time the articles he publishes are complete BS or they are a backhanded compliment or are completely childish. I knew the rumor Christina acting like a diva that he posted was untrue. You know, being involved a lot more in the online community than I used to be has really opened my eyes to what's true and what isn't. The last time I recall Perez posting any articles with substance was back in 2007 when he was in his prime. I hope that with time his hypocritical, narcissistic, venomous presence on the internet will begin to dissipate even further. He symbolizes everything that is wrong with society.

Source: Echo
Posted by AGUILERA ONLINE™ at 2:27 AM