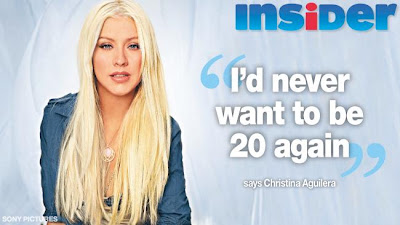 EIGHT years ago Christina Aguilera sang about being a fighter on her smash hit album Stripped. The Mickey Mouse Club alumni, who shared the stage with fellow cookie cutter kids Britney Spears and Justin Timberlake back in their pre-teen day, had the right to make the claim as a battler.

Her violent father and difficult childhood seemed to set her apart from other pop princesses and gave her a soulful edge that helped shift 50 million records and make her one of the top selling artists of all time.

But with a happy marriage to producer Jordan Bratman in 2005, followed by the birth of their son Max two years later, her fighting years seemed to be behind the petite blonde with the huge voice.

Today her boxing gloves are sadly back on when we meet to discuss her new project, the film Burlesque.

Her first big screen movie, Aguilera plays a small town gal making her way in Sin City at a high end strip joint. It's poignant that her first screen role be that of a woman struggling to keep her life together at a time when Aguilera's music career is at its lowest point - her last album Bionic's sales were underwhelming and it's the first record she hasn't received a Grammy nomination for - not to mention the recent announcement of her divorce from Bratman.

Unwilling to delve into the reasons for her recent split with Bratman - in true Hollywood style they cited irreconcilable differences - Aguilera is circumspect about the timing of this new direction in her life.

"I definitely changed making this movie," she says. "There was a lot that I learned about myself professionally and personally. I grew wings for the first time, and felt more independent than I have for a very long time.

"My character Ali is not about entourage and posse, so I didn't want anybody around either. I wanted to feel open, vulnerable and fresh to the experience."

From her first pop hit, Genie in a Bottle, back in 1999, until now, the world has seen Aguilera grow from a fresh-faced pop star into one of the most established music acts in the world. But despite her enormous success, she admits that she's still finding her way.

"I've had many realisations about who I am, what I want out of life, and what needs to happen at this time of my life to be happy."

One of the things making her happy is two-year-old son, Max, and the native New Yorker admits that motherhood changed her more than her fame and fortune ever could.

"I think that when you have a baby, you make more sense of yourself," she says.

"Once you stop the breast-feeding, and your body is yours again, you experience a new beginning as a woman, and start to feel more comfortable in your skin."

Max travels everywhere with her and, like every other mother in the world, she has to fight to balance work with home life.

"It's definitely challenging, but Max is well taken care of because of the hard work that I do," she says. Max was on set while she was filming Burlesque, and also with his famous mum when she first met Cher.

"I was nervous to meet her at first because I wanted to make sure I was a least wearing high heels," giggles the 1.56m star. Cher is 1.74m. "But I walked into dance rehearsals one day wearing my flats, and I had my baby in my arms, and there she was.

She needn't have worried as Cher immediately made Aguilera feel at ease.

"Cher gave me priceless amounts of advice, both personally and professionally, and became over time like an old girlfriend," she reveals. "She's open and genuine, and a real lady. We had a funny exchange that first meeting because the producers had sold her the movie by saying, 'Christina would drink your bathwater if you do the movie'. So I said, 'I'm the one who wants to drink your bathwater'. She couldn't have been sweeter. She gave me a big hug and said, 'I'm glad you're here'. She really welcomed me to the world of acting."

Aguilera wrote a handful of the songs on the soundtrack, and also performed in many of the spectacular dance numbers, but glamorous though they looked, it really was a case of no pain, no gain. The dancers even had a special spray tan room at the studio to hide their bruises.

"I got so bruised. I bruise easily anyway, so on this film, cover-up was my best friend," she says. "There's a moment in the Diamonds Are A Girl's Best Friend number where I whip this strand of diamonds around, and while I was learning how to do it properly I would whip myself silly. I just beat the crap out of my legs. It was brutal."

So, will Christina be looking for any more film roles?

"Oh absolutely, I really enjoyed it," she says. "Music will always be my first love but I'm reading more scripts at the moment. I definitely feel that I'm starting a new chapter in my life."

Burlesque is released in January

Source: DailyTelegraph
Posted by AGUILERA ONLINE™ at 7:44 AM