GOLDEN GLOBE ORIGINAL SONG, WHO WILL WIN? - "BUT IT MAY JUST COME DOWN TO AGUILERA AND PALTROW'S NAMES" 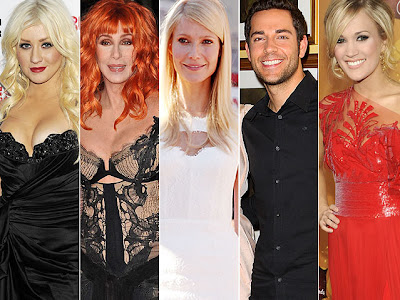 The 2011 Golden Globe nominations are out as of this morning, and with it comes a new crop of songs up for Best Original Song honors.

"Bound to You" and "You Haven't Seen the Last of Me" from "Burlesque," "Coming Home" from "Country Strong," "I See the Light" from "Tangled" and "There's a Place for Us" from "Chronicles of Narnia: The Voyage of the Dawn Treader" all made the cut.

So that's pitting Christina Aguilera, Cher, Gwyneth Paltrow, Mandy Moore and Zachary Levi and Carrie Underwood against each other. It's a good mix: a return to a classic Disney musical ("Tangled"), new musical ("Burlesque"), a actress launching into new musical territory and an "American Idol" tacking on a credit's song for a kid's adventuremovie.

Last year, they chose "The Weary Kind" from "Crazy Heart" over the credits songs from "Avatar" (Leona Lewis) and "Brothers" (U2) (and over that silly little number from "Nine"). Bruce Springsteen's world-wearied "The Wrestler" took it over songs from "Cadillac Records," "Bolt," "Gran Torino" and my personal favorite "Wall-E" (which itself had that tacked-on feel, too, sadly) in 2009. It was Eddie Vedder ("Guaranteed" from "Into the Wild") the year before that, and Prince ("Song of the Heart" from "Happy Feet") the year before that. Emmylou Harris, Mick Jagger, Annie Lennox, U2, Sting. That's the whole last decade of Best Original Song winners.

They're all big names, many solo artists, all longtime musical veterans. "Crazy Heart" is a little bit of the exception -- it was co-written by newcomer Ryan Bingham -- but also co-written by esteemed songwriter/producer T Bone Burnett and sung by acting vet Jeff Bridges.

So compare that to this year's crop? It's a bit of a new ballgame.

Moore and Paltrow have been acting for quite a while, though Moore's singing career is much more established. Cher just kinda came back. Frankly, I don't care much for the paint-by-numbers composition given to Underwood, whose career is currently on the short side rather than the long.

"Country Strong" has been described as "'Crazy Heart' with a girl," a rep that might taint voters' perceptions. Interesting choice, going with ballad "Coming Home" as opposed to the title track, too. Aguilera is one of the most gifted pop vocalists from the last two decades -- and shared a pop era with Moore, remember? -- but has had a hard year, with poor critical reception for her new album and mixed results for "Burlesque." Cher's track may split the votes between the two, though I think Aguilera's track is a much stronger bet of the two "Burlesque" songs (though Cher's got the Cher name).

I think the tracks from "Burlesque" and "Tangled" were much better executed and produced, but it may just come down to Aguilera and Paltrow's names.

What do you think of this year's selections?
"Bound to You" from "Burlesque"

"Coming Home" from "Country Strong"
"I See the Light" from "Tangled"

"There's a Place for Us" from "The Chronicles of Narnia"

"You Haven't Seen The Last Of Me" from "Burlesque"
Source: HitFlix
Posted by AGUILERA ONLINE™ at 2:43 AM