Last night was filled with performances and surprises. We had 2 looks and I really wanted to play with the performance look. But with less than 3 minutes to change one needs to be creative. So we came up with this rock and roll fun look that took me from the red chair to the stage in no time. Hope you enjoyed it - XoXtina Stylist Simone Harouche:
For tonight's episode of the voice, Christina was not only a judge, but performing with her team. We had to choose looks that we're both fun and that completed the overall look with hair and makeup.

Christina loves to play with makeup and clothes when performing. For her performance of fighter, we wanted a rock and roll look. We went with a custom studded corset, boy shorts, Una Burke belt and gorgeous crystal and studded Christian Louboutins. 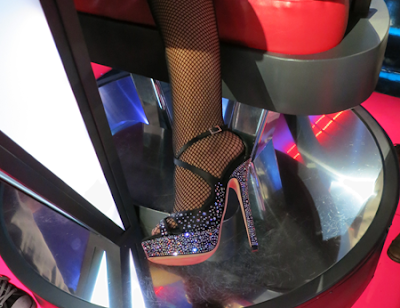 When it came to Christina's outfit in the red judges chair, we wanted to go with something that also worked with the hair and makeup of her performance. Christina wore a black embellished chiffon tunic made by Kaufman Franco, heels by Jimmy Choo. For jewelry, she wore a custom made "Xtina" knuckle duster, Loree Rodkin earrings and a Loree Rodkin diamond pyramid pinky ring.

Makeup artist Jake Bailey:
Christina's look tonight was very Rock & Roll so we wanted something dark and edgy on the eyes but with some extra pow since there was a performance and it's always fun to bring a little something extra for a performance. I’ve done a lot of bright lips but I haven't done any brights on her eyes yet. We decided on a bright cobalt blue shimmer. I started by lining her entire eye with CoverGirl's liquiline blast eyeliner in "blue boom". I then broke off the tip of the same pencil and smushed it onto my hand turning it into a cream shadow which I then blended all over her lid and into the crease of her eye. I then applied a blue glitter from Make Up For Ever to the cream shadow using my fingertip. I used a major set of lashes from Smink and coated them with Diorshow mascara. I used the usual Nars bronzed ("casino")in the hollows of her cheek and dusted M.A.C. Blush in "pink swoon" on the apples of her cheeks and then lined her lips using Urban Decay 24/7 lip liner in "paranoid" I filled in the lip with a pale pink shimmer lipstick. I used YSL'S rouge pur couture #37 I finished the lip with a tiny bit of a pale beige shimmer gloss. The one i used was Dior Addict ultra gloss glow #216.

Hair stylist Craig Gangi:
For today's look we decided to do something straight and sleek with a little separation to add to the Rock & Roll theme. I used Royal Blowout by Oribe. It adds a healthy shine to the hair and protects from heat damage after flat ironing. This look worked well with her icy, cool platinum hair color. When the style was complete I finished the look with Oribe Dry Texturizing Hairspray, which enhanced her sexy, piecey texture.