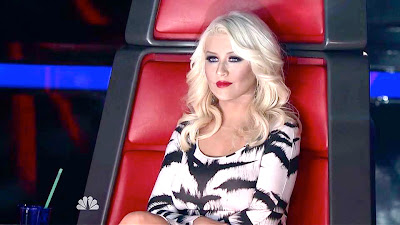 It was a big day for NBC’s The Voice. Monday marked its second foray into live shows. It also marks my second year of attending them and bringing back the behind-the-scenes details to The Hollywood Reporter’s readers.

To this reporter, the show’s stars and crew had a much more calm demeanor than last season. With its high ratings and unique take on the genre, gone was the need to prove that it could carve a niche in the densely populated world of TV singing competitions.

Blake Shelton's and Christina Aguilera’s teams were the first up to compete for America’s votes. And while I’ve learned that performances can be a quite different animal on TV compared to experiencing them live and with a jazzed-up crowd, I’ll venture to say that I thought the night had some strong performances (Erin Willett, Jordis Unger, Jesse Campbell) and ones that pulled off some surprising range (Jermaine Paul, Naia Kete).

But you came here to read about the behind-the-scenes action. So without any further ado, here are 9 things that you didn’t see on television.


1. Turn up the air conditioner, please. Of all the singing competitions I’ve attended live, I sincerely enjoy attending The Voice the most. But there is one thing that continues to be a problem at the Warner Bros. Studio Lot Stage: It’s still really hot in there. Someone has got to take a look at that air conditioner.

2. No bullying allowed. I’m going to try and leave the warm-up guy (who I’m told by other reporters uses the same jokes at different shows) alone this year. He’s a necessary evil if the series wants the audience to stay energetic through the two-hour taping. But he said something that I’m not sure I’ve ever heard him say before.

3. It’s not all live, but duh. Typically, I’ve experienced that if a show can pre-tape something before the live show airs, it will. With plenty of moving parts that could go wrong during a live show and if pre-taping a segment doesn’t affect the competition results, then why not? Monday’s episode taped the entire opening segment up until Jermaine’s performance. I believe it took about two takes to get it right.

4. Sorry, Bieber is not here. I said I was going to leave the warm-up guy alone, didn’t I? Well, this was too good not to mention. There was a group of eight-year-olds who had signs saying, “We love you, Adam. You have moves like Jagger.” And the guy decided to ask the girls what they thought “moves like Jagger” meant. They clearly had no clue, but he kept asking them repeatedly. Awkward. It ended with him asking if they like Justin Bieber too -- and this was surreal -- one of the girls started screaming as if she thought the pop star was going to walk into the studio like some episode of Punk'd. Again, awkward.

5. Christina is putty in her fans' hands. Part of the levity of the night was seeing its diva coach running around without her shoes on and signing autographs. There was also a fan who came all the way from Brazil to see the show and she got up to give him a hug. Aww.

6. A celebration of Betty White. As you saw on the show, Betty White was there to promote her new prank series, Betty White’s Off Their Rockers. What you didn’t see was that during the commercial break, the production played the Golden Girls theme in her honor.

7. Carson Daly is bound to shake it. I always know that the host is going to bust a move. They’re usually very short spurts of activity, so you really have to keep an eye on him. During Monday’s commercial breaks, he fist-pumped during one song and then did a crazy little jig with Jordis’ dad, who was wearing a traditional grass skirt. He later told me that it was in observance of the king of Tonga’s recent death.

8. Things would be purrfect for Cee Lo if only… the production allowed the coach to bring his new mascot, Purrfect the cat, to live shows. I overheard Cee Lo Green saying that he wasn’t allowed to bring his new feline friend, since the production feared that it would freak out from the loud sounds and lighting of the live show. That may explain Cee Lo’s outfit Monday night. He lost it over the cat.

9. The Voice groupies. Several young women seated in front of me told the warm-up guy that they were wearing Team Blake T-shirts. When the coach heard, he turned around and gave them a big wave. This is the same group of women, by the way, who counted to four and then screamed, “We love you, Adam,” earlier in the taping. Is there such a thing as The Voice groupies? Note: This expression of fandom was much cuter with the eight-year-olds.