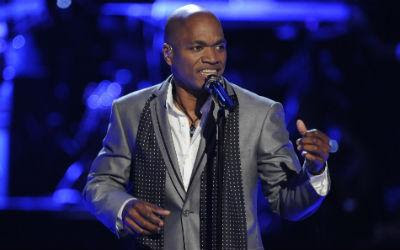 If Jesse Campbell, the breakout star from the current season of NBC's The Voice, looks and sounds familiar, it's not just because his voice is reminiscent of Luther Vandross, Donny Hathaway, Marvin Gaye and other soulful greats before him.

In 1994 he signed with Capitol Records and released his first album, Never Let You Go. He followed that up with a memorable cover of the Hathaway-and-Roberta Flack classic "Where Is the Love" for the sound track of the 1995 film Dead Presidents, which went certified gold. He was let go from his recording contract with Capitol that same year.

Now Campbell, 42, says that he's more ready for mainstream success than ever before. And many who saw his performance on April 2 -- when he more than wowed the celebrity judges (Christina Aguilera, Cee Lo Green, Adam Levine and Blake Shelton) with his performance of Louis Armstrong's "What a Wonderful World" -- are inclined to agree. He garnered enough votes from the public to move to the next round of the vocal competition. The winner of The Voice will receive $100,000 and a recording contract with Universal Republic Records.

Each of the judges coaches his or her own team of competitors, and Green has said that if someone from his team doesn't win, he's looking for Campbell to take the victory. Campbell's coach, Aguilera, said that he could sing the alphabet and make it sound good. And Levine ended his comments with a warning to his own team: "Here's the dude you got to beat," he said after Campbell's performance.

"It's a little bit of pressure," Campbell told The Root as he spent his day off with his daughter in an amusement park, pausing several times to say hello to passersby, intent on acknowledging everyone who recognized him. "But it just helps me to be more focused. I am only as good as my last performance, so I have to be on my 'A' game and just bring it the best I can every time."

That's what he brought to his first performance in the blind-audition round, during which the judges' backs are to the contestants while they perform. Campbell's powerful rendition of Leon Russell's "A Song for You" (also famously sung by Hathaway) prompted three of the four judges -- Green, Aguilera and Levine -- to turn around their chairs and face him less than 10 seconds into his performance (an action that is equivalent to a "yes" or a "You're going to Hollywood" response in other vocal competition shows). Ten seconds later the last judge, Shelton, did the same. Getting all four judges -- a pop rocker, a country singer, a big-voice diva and a rapper-soul singer -- to want to recruit you for their own teams is no small feat.

"At that point I was just focusing on really being my best," Campbell recalled. "When Blake turned his chair, I got a little emotional and my voice got a little shaky. And that's when I said, 'Wow, I am actually living my dream.' Then I got into my head and starting trying to figure out who I was going to pick, but had to remind myself to stay focused and finish the song before I forgot the words," he joked.

Choosing a coach was a hard decision, Campbell said, because he admired each of their talents. He admitted that he tried out for the show partially because of Shelton, whose songs he used to sing as a street performer. But the choice to settle on Aguilera came down to divine intervention.

"I thought she was really, really good at what she does, and she's been in this thing for a really long time. So then I asked God who should I go with, and the very first name that came to my mind was Christina," Campbell said.

In his second performance of the season, Campbell went head-to-head with gospel singer Anthony Evans in the battle rounds. The performance of Alicia Keys' ballad "If I Ain't Got You" sent the blogosphere abuzz with claims that theirs was the most epic battle in the show's history. What clinched Campbell's victory? An unforgettable Luther-esque ad lib of the word "baby" that sent the crowd into an uproar.

"I didn't come into this show wanting to be a competitor," Campbell said. "I wanted to compete from a place of love. But I knew that one of us had to go at the end of that round, so I just chose to really do what I do as best I could."

Faith in the Future

With three perfect performances on The Voice under his belt, and a talent that is arguably unmatched by any of the other contestants, it's clear that Campbell is the one to watch this season. In the tradition of most great soul singers, Campbell cut his chops in the church. At age 16 he joined the choir, where, he says, he developed his musical sensibilities.

Shortly after Capitol Records released him, Campbell was left to make a living singing at church events and weddings. When he had difficulty earning enough money to provide for his family, his wife left him and he became a single father. Soon after, the singing gigs dried up, and he found himself homeless.

"I found myself in a rock-bottom experience," Campbell said. "I had some issues that kept me from being who I am -- I had to work through a lot of self-esteem and unworthiness."

Despite some of his lowest moments -- sleeping in his car with Soraya, his 11-year-old daughter, and not being able to afford simple fever medication for her when she fell sick – Campbell said that he looks back on those experiences without bitterness. He said that he operates from love, a place that gives him a quiet confidence that seems to reveal itself most when he sings.

"I'm not mad about my past because it's those moments that have brought me to the present, which I also believe will bring about the experiences of the future," he said.

He hopes that future includes being crowned the Season 2 winner of The Voice, but he doesn't expect to take the victory without a fight. If it comes down to him and another contestant, he wants to go head-to-head with the best, and for him that's Lindsey Pavao. Pavao, who performed a punk-rock remix of Trey Songz's "Say Aah" in her blind audition, arranges her own music, which Campbell feels sets her apart from the rest.

"I would really want to perform in the finals with someone who is going to bring their 'A' game. To me, Lindsey has the creativity unmatched by anyone that I am aware of on the show. She takes songs and flips them and converts them with her flavor and her style. And she's selling probably more [iTunes] units than anybody. And I think she is a beautiful, creative and interesting person."

Whether or not we see a Pavao-Campbell showdown remains to be seen, but if Campbell -- who says he wants to be the male version of Aguilera -- sticks around until then, we'll get to see him cover songs from his musical icons, who include Michael Jackson, Sarah Vaughan and Vandross.

Signing a deal with Universal Republic would be nice, but Campbell said it's the small possibilities that get him most excited, like being able to purchase a puppy for his daughter, for whom he says he's doing all of this.

As for his ultimate goal? It's quite a mouthful.

"My desire is to be an international recording artist who sings heart-centered universal music with soul," Campbell said with a slight chuckle. "I think I need to patent that."

Source: TheRoot
Posted by AGUILERA ONLINE™ at 9:24 AM